The four wineries comprising the Orange River Wine Route in the arid Northern Cape are dotted over more than 350 kilometres, but all are close to the Gariep (Orange) River, whose micro-climate and soils enable the growth of the grapes. Their mainly white wines have a wide appeal across tastes and pockets, and cover the gamut from dry to naturally sweet, sparkling and dessert. This region is known for its wide-open spaces, breathtaking sunsets and starry nights. 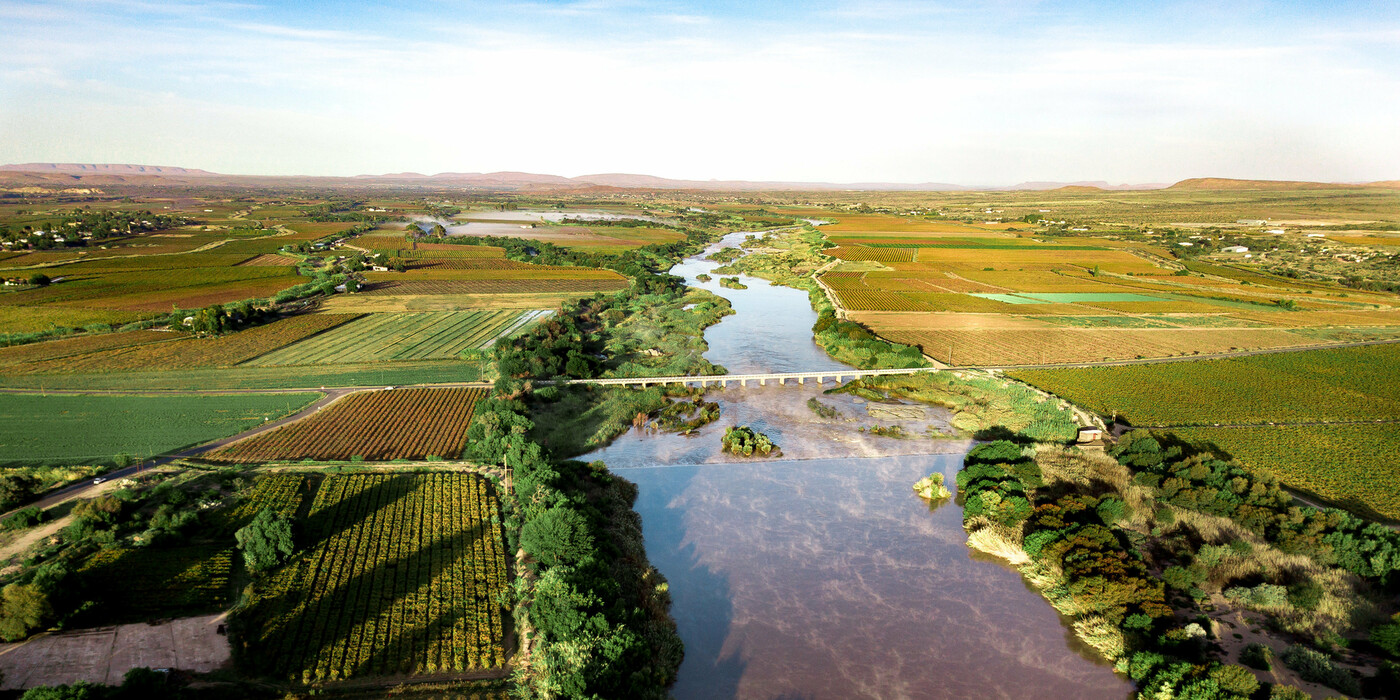 Although a powerhouse of wine grape farming, the Northern Cape has only a handful of independent winery experiences in a radius of some 350km from Upington epicentre.  By comparison, that same radius applied to Stellenbosch incorporates virtually every other South African wine business located from the Klein Karoo to the Olifants River region of the West Coast.

Wine is not the only reason to visit the region, of course. "The Orange and Vaal Rivers merge here and it's a sight to behold," says local winemaker Ian Sieg. "There are also glaciated pavements some 290 million years old that you can visit."

The Northern Cape's Orange River Cellars is by far the biggest in South Africa and one of the largest in the world. Established in 1965, it now comprises four wineries that take in grapes from farms spread over 300kms along the Orange River. It is a major source of distilling wine for amongst others, South Africa's award-winning brandies.

From a visitor's perspective, the best place to start is the home of Orange River Cellars in Upington.

On the outskirts of Upington lies Bezalel, a small wine and brandy estate that takes advantage of the Orange River's fertile alluvial soils at Dyasonsklip. A landmark of its location is the massive solar plant and tower mirror that's visible to anyone approaching from kilometres away.

Following Bezalel's footsteps as a private cellar, Die Mas (Afrikaans for The Mast) registered in 2005 and became Kakamas's first although the farm had been in the Hanekom family since 1970. The hamlet itself lies further along past Bezalel and some 80km southwest of Upington.

Here, the landmark indicator is the Pink Padstal (farm stall) located a few metres from the entrance to the farm while the drive to the cellar takes the visitor through the vineyards and along a life-giving irrigation canal.

Landzicht has been producing wine for some time; grapes were first planted along this section of the Orange River in the 1990s. Awareness of its existence was however suddenly re-awakened last year when judges at the Old Mutual Trophy Wine Show (OMTWS) voted the Landzicht 2015 Reserve Cabernet Sauvignon as Best in South Africa. It has two cellars - one located at Douglas, the other 120km east, at Jacobsdal in the Free State. Both are approximately an hour's drive south of Kimberley and have their own dedicated wine tasting rooms. Cellar tours are offered at Douglas.

Like many of South Africa's wines, local brandy is world-class and there's nowhere better to enjoy them than where they're born.

Explore South Africa's twenty-three wine routes with our insider guide and tailor-make your next winery visit here. Travel to the place of origin to learn more about South African wine, to uncover regional secrets and simply to slow down and enjoy life's special moments.