The KwaZulu-Natal Midlands, stretching from beyond the Mooi River to the foothills of the Drakensberg, are guaranteed to take your breath away with their beauty. The popular Midlands Meander route unwinds through rolling hills and villages, and the first sight of vines is always surprising. Three wineries offer visitor experiences on this informal wine route which takes about an hour to drive along the Midlands Meander, with the final stop in the Central Drakensberg. 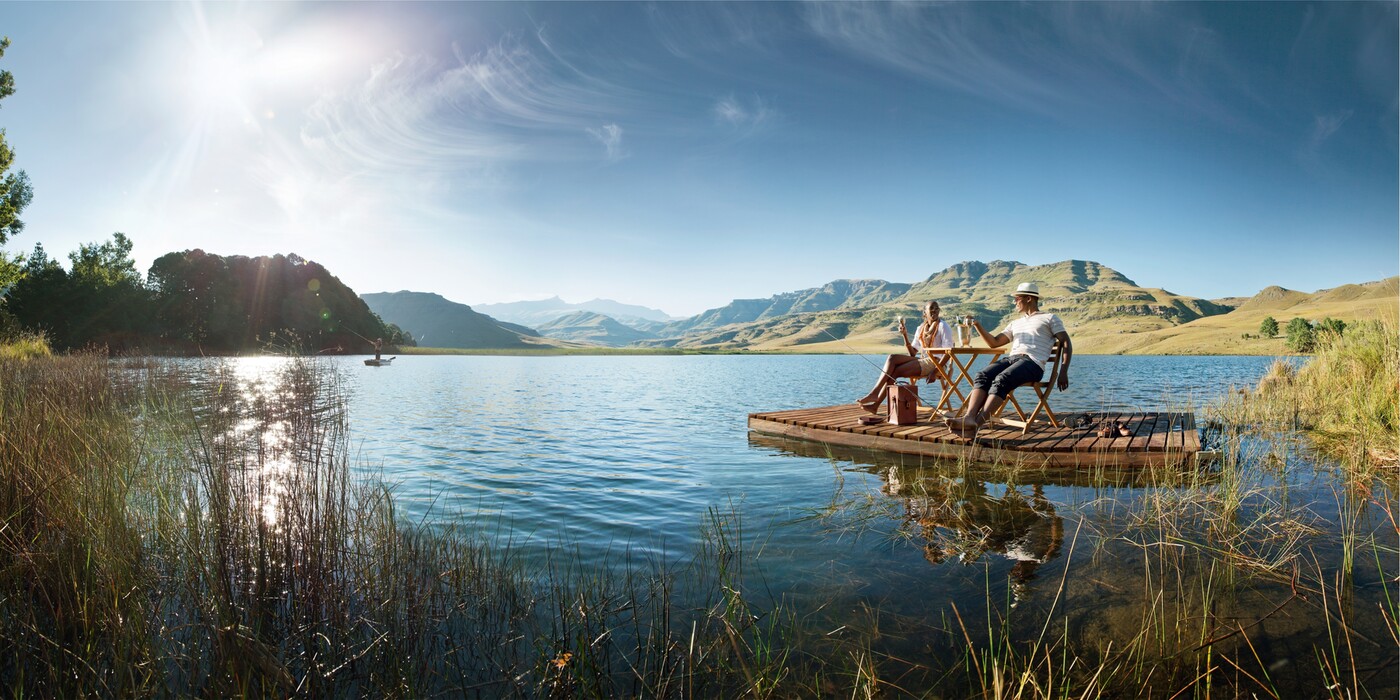 The wine scene in KwaZulu-Natal has been coming along for some years, but for the average wine-lover it has hardly been worth dedicating a trip to its exploration, until now. With three established wineries consistently producing own-brand bottled wine across a variety of styles and categories, an informal wine route has arisen stretching over 120 kilometres.

The region is regulated under the Wine of Origin scheme as comprising the districts of Central Drakensberg, which is home to Cathedral Peak Wines; and, Lions River, where Highgate and the oldest of the three, Abingdon Estate, ply their trade along the popular Midlands Meander Route.

In terms of scale, the operations are very much boutique in size, but they are the leading edge of a growing local interest in wine.

Highgate Wine Estate has produced wine since 2009 and was the realisation of a dream for Rudi and Cindy Kassier. In 1996, Rudi and Cindy purchased Highgate. On the fallow land they deployed hydroponically grown vegetables and started supplying guesthouses and a basic road-side farmstall. The stall led to the construction of a larger building on the site before others wanted to open shop alongside. He developed a series of small buildings which became the renowned Piggly Wiggly Centre on the Midlands Meander.

The showpiece cellar was completed recently and incorporates a fine dining restaurant called Menu, leased to the son of the owner of locally renowned La Lampara restaurant. The cellar processed its first harvest this year and Rudi is especially proud of Highgate's The Lions River Chardonnay – the region's first to be certified.

Abingdon Estate is situated on the side of a hill down a quiet gravel road. Parts of the property not covered by vines are shrouded by trees, which is one of the reasons it's so popular with city day-trippers eager for a lunch stopover during jaunts to the country.

The Smorthwaite family has been making wine at Abingdon since the early 2000s. Ian and Jane bought the farm in 2000, planted its first vines four years later and opened the tasting room in 2009.

Abingdon generally doesn't enter its wine for competitions. Its production is low and KZN is an unknown in the traditional local wine scene. Nonetheless, of only three South African Viognier wines rated by UK-based Decanter magazine in 2013, Abingdon was one of two that received a bronze medal.

"That kind of achievement just helps to get awareness that KZN can produce quality wines," says Laurie.

Still, the tasting room with small, tapas-style restaurant is often filled. Most visitors are from Durban with seasonal increases due to Johannesburg-Durban traffic.

The road towards Cathedral Peak and the mountains near Winterton takes you through rolling hills and villages. Beyond, the Drakensberg looms. The first sight of vines arrives suddenly, over a rise where the sprawled blankets of soya bean and wheat, open onto to neat, trellised rows.

In addition to hosting functions, including weddings, there's a small bistro that overlooks the vines, Glen Grey dam and a neighbouring private game reserve.

Visitors will soon be able to pick their own table grapes (planted to be ripe exactly during peak school holidays) to go with picnics of bread, cheese and wine.

We interview Nkululeko Mkhwanazi, brand ambassador in his home town of Johannesburg and Kwa-Zulu Natal for a number of wine brands - a job that has earned him the moniker of 'Durban's Minister of Wine' - on how his wine story started.

Wine tasting in the KwaZulu-Natal Midlands

Wine farms in KwaZulu-Natal started consistently making news headlines at the end of the 1990s. While still small by Cape comparison, they offer a rewarding visit off the beaten track. Travel along the popular Midlands Meander Route, making a third and final stop in the Central Drakensberg at Cathedral Peak Wine Estate.

Explore South Africa's twenty-three wine routes with our insider guide and tailor-make your next winery visit here. Travel to the place of origin to learn more about South African wine, to uncover regional secrets and simply to slow down and enjoy life's special moments.